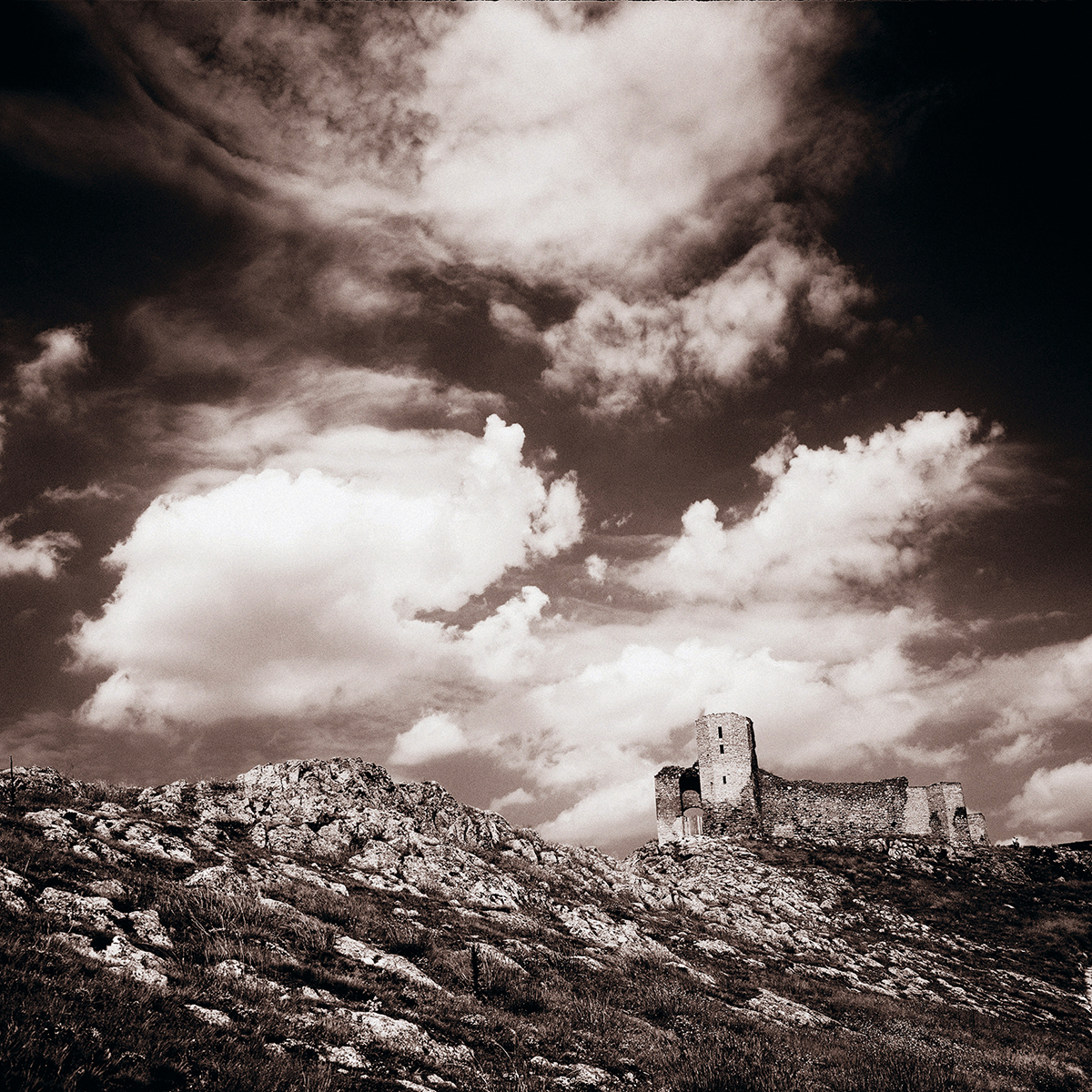 But who hides behind the clouds?

“Maican…, it’s good that we didn’t stay at Yeni Sale overnight.”
“How so?!”
“DEATH hovered over the citadel!”

In the early summer of 2013, I left Bucharest with photographer Gheorghe Dumitru Maican, on his idea, for a short two-day trip to the mouths of the Danube. We were going to photograph the ruins of the citadel Yeni Sale, a citadel built by the Venetians four centuries ago.

We left Maican’s studio early in the morning, to the tunes of a song with a chorus that read: “In the chilly morning, I show my face to the sun, and look in the wide sky”. We too looked “in the wide sky” and saw not one shadow of a cloud; it looked like the weather was going to be splendid. With music and stories, we didn’t feel the 300 hundred kilometer-long trip. We only stopped on the Dobrogea hills where, camera in hand, I stealthily got close to some sheep that were peacefully grazing near a group of wind turbines. “Two means of existence” Maican said smiling when he saw what I had photographed.

We reach Yeni Sale around 11 am. Unfortunately, although the sky was blue, the air was filled with vapors, making the scene not very appropriate for photographs. We courted the citadel for about one hour and we each shot a few photographs, relatively discontent. The sky had become foggy and clouds were starting to appear all of a sudden, heralding light rain. On the first rain drops we left, thinking we would stop for the night somewhere nearby and return the next day, with more good luck perhaps, but eventually we got back to Bucharest. Stingy with film, I only shot 5 photographs, all on medium format, positive film.

One month later, I look at the developed film without many expectations. However, I find one photograph interesting, both in terms of atmosphere and composition. I turn it into a black and white, intensifying its dramatic air and I slightly increase contrast. I declare myself satisfied that after 700 kilometers I had not returned empty-handed. I set the photograph in a modest-size frame which I then exhibit in the Hyphen Gallery. Another month passes and on an August evening, rather late, after sunset, a friend visits me. I show him the new items in the exhibit. Upon seeing the Yeni Sale photograph, he sincerely interjects: “This one is terrifying!” “Why? Do you have something against black and white photographs?” I ask, slightly surprised. “No, I have nothing against black and white photographs, on the contrary, I like them” he said, “but the skull above the citadel seems so real!”

Upon his uttering the word “skull” I all of a sudden see it too, revealed in all its demonic majesty, gigantic, looking down, powerful and threatening. Anatomically it was so perfect! One could even see the fontanelle or the skull’s soft spot, as it is colloquially called, un-ossified, as some people have it. It only lacked the jaw, detached and lost how many thousand years ago… At the base of the nasal pyramid, there is a cross. Indeed, in this context, the word “terrifying” does not do it justice!

It is past nine in the evening. I anxiously go to the office and upload the photograph on the blog “1001 Fairytales” together with its story. I am alone in a villa on the Shitu Magureanu street, in the Papa Ioan Paul al II-lea (Pope John Paul II) small square, across the street from the Cismigiu Garden. I post the article and as it does every time, WordPress tells me the number of the posted article and repays me with a randomly attached famous quote. “Congratulations, it is your 66th posted article.” And the quote was: “I TRY TO LEAVE OUT WHAT THE OTHERS SKIP.” By Elmore Leonard, an American writer specialized in western, crime fiction and suspense thriller, known for the short stories that were later turned into the films “Hombre”, “Get Shorty”, “Out of Sight”, and “3:10 to Yuma”.

Leonard Elmore passes away after a stroke on August 20, 2013, in his house in Bloomfield Hills, a suburb of Detroit, only 6 days after a computer from who knows what server farm, matches one of his quotes with a terrifying photograph taken in a different corner of the world and seemingly cut out of a poster of one of his films.

In the sixth month of 2013 I took a photograph in which some clouds unexpectedly gathered in the clear sky form a skull with a cross at the base of the nasal pyramid that looks menacingly from above the ruins of a century-old citadel. Could it be that the translucent skull and its entire strange story herald future events? Could it be heralding a great and dreadful thing about to happen or are these simple coincidences weaved into the strange thread of the imagination of both the photographer and the viewers? Who are we to be able to certainly answer such questions, nonchalantly exploring the limits of reality? Perhaps we are nothing but diaphanous star dust which took particular shape due to who knows what circumstances, precisely like the cloud in the photograph and we are endowed in turn with just as much being. And stars too play sometimes. 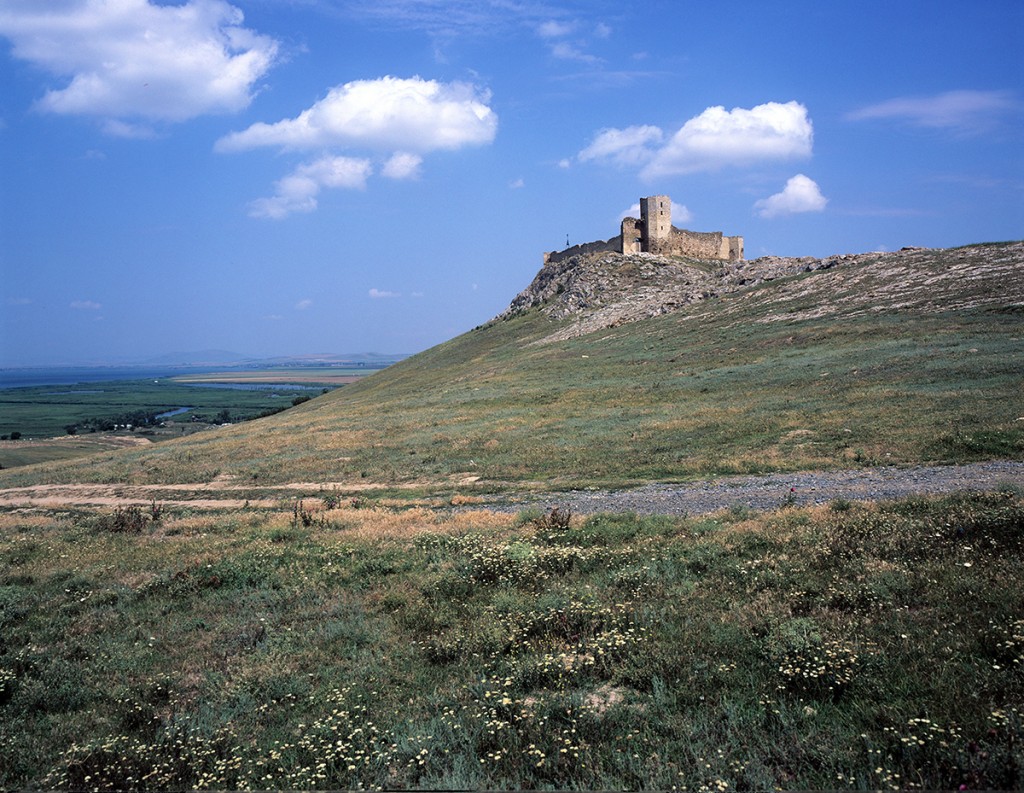 2 kilometers east of the Enisala commune and 7 kilometers of the city of Babadag, on a limy hill

that towers over the area of the Razelm and Babadag lakes like an eagle’s nest, stand the ruins

The Enisala citadel is one of the military architectural monuments on Romania’s territory. Built

in the Middle Ages it is remarkable through its planimetric design, fortification system,

construction technique, and architectural elements. The fortification was built in the latter half

of the 14th century by an authority covering the area from the mouths of the Danube. Based on

the construction techniques, it was speculated that the only ones interested in building a

citadel inside the Northern Dobrogea fortification system, a citadel facing the sea for the

surveillance of ship traffic, were the Genoa merchants, who had large amounts of money

earned from commerce and held the monopoly over navigation on the Black Sea.

Delta cities of Chilia and Likostomion, Cetatea Alba from the mouths of the Dnister River, and

Enisala citadel was a part of the defensive system of Wallachia. After Dobrogea was conquered

by the Turks on 1419-1420, an Ottoman military garrison was installed in the citadel.

Later, due to the expansion of Turkish domination past the mouths of the Danube all the way to

Cetatea Alba and Chilia (1484), and to the formation of the sand seams separating the Razim

Lake from the Black Sea, the citadel was abandoned in the 16th century, as it no longer met

noticed from great distances. The West-South-West hall was built on the steep border of the

promontory. The citadel has a trapeze or irregular quadrilateral shape, and its West-South-

West side that is 100 meters long is almost completely destroyed; the eastern and northern

The inside wall is 1.50-1.80 meters thick and on its outside it had eight trilateral, quadrilateral

limestone cubes. The entrance (on the southern side) was a high opening gate with double

arches and a massive pentagonal defense tower. The second inner wall of the fortification, on

its north-eastern side, has square and triangular towers. After 1991, the citadel’s walls

shattered by the natural phenomena were restored, Enisala becoming an important tourist

village”. In the 15th century, when Dobrogea entered under Ottoman domination, the

inhabitants were Romanian. Archeological research conducted in the location “La Biserica” (At

citadel by the Ottomans from the Romanian princes, which also demonstrates the settlement

Danube and the Black Sea.